After arriving back on the west coast from our NYC adventure, we spent the night near SFO in order to go to the Foster Farms Bowl at Levi’s Stadium the next day. Max went to Purdue, so when we found out that game was happening, we obviously bought tickets. But first – food. After we got off the plane, we went to Amoura for dinner – a smallish Middle Eastern restaurant. It was pretty empty, but it was within an hour of closing time on a Tuesday, so that was to be expected. The food was really great, but we were both entirely too exhausted to be able to enjoy it fully.

For breakfast the next morning, we went to Cafe 382, also in South San Francisco. Both of our breakfasts were incredibly delicious – I could have ordered one of everything on the menu! Highly, highly recommend, but it also got busy very quickly. I’m not sure if that’s because it was still during school break/holidays, but keep that in mind if you plan to go. 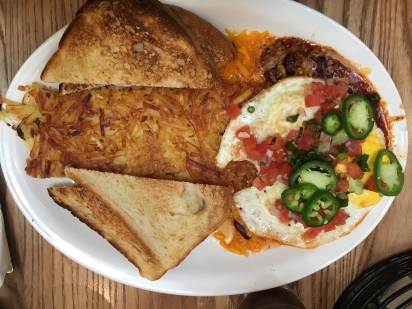 After breakfast, we picked up a friend from SFO and headed to Santa Clara to go to the game. We stopped by a grocery store for some pregame materials, and headed to the stadium to hang out before the game. Since they hadn’t sold enough tickets, we got upgraded from our original seats to seats in the “club area.” Purdue won, which was awesome, and we got to take our photo with the Boilermaker Express!

For my birthday weekend in early January, we headed up to SF. The day began at Anchor Public Taps, Anchor Brewery’s public brewery. I misunderstood their website and we rolled up to the tailgate area for AT&T Park which was clearly not open as the Giants are not currently in season – so don’t make my mistake! What we saw of the tailgate area looked pretty cool – reminded me a lot of the Bullpen pregame area at Nats Park – so I’m looking forward to going there to pregame for the Giants sometime this summer. 🙂 Once we finally figured out where we were going, we enjoyed a few delicious beers and a gyro from the food truck outside. It was sunny and in the 60s, which is the first birthday I’ve ever been able to say that for. The brewery itself was pretty awesome, and I would love to have this wall of beer in my house: 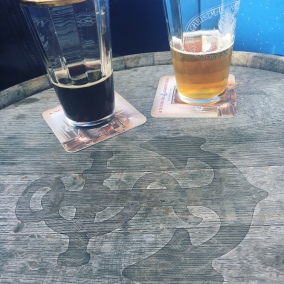 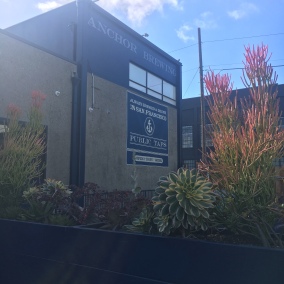 For dinner, we went to Bix – which is located in an alleyway and the only indication it’s there is a single neon sign – where we had some incredible cocktails, amazing oxtail fritters, and delicious dinner. I had the duck which was fantastic, Max got a delicious hunk of meat, and we followed it up with a chocolate cake (because you should always have chocolate cake on your birthday!). From there, we went to Wilson & Wilson

Private Detective Agency, a speakeasy in the Tenderloin area. We went to our first speakeasy in Salt Lake City, which is one of my Top 10 Dining Experiences ever, so Max made plans to go to this one. If you like unique drinking experiences, definitely check this out. It’s located in the back of Bourbon & Branch, which we did not spend time in other than walking to our table, but looked very cool. Following the speakeasy, we got a couple glasses of wine and a cheese plate at Tratto and some pizza slices…somewhere nearby that I can’t remember. The next morning, we went to Northstar Cafe to watch the Buffalo Bills playoff game with the SF Bills Backers. The Bills unfortunately lost, but I got a sweet t-shirt and we got to drink plenty of Labatt Blue (and take ridiculous selfies), which is basically heaven for these displaced Buffalonians.

We have driven through Santa Cruz a few times, but never actually stopped – so we decided to make a day trip. We did some hiking at Henry Cowell Redwoods State Park, a gorgeous park with some incredible views and redwood trees. We were dogsitting for a friend that weekend, so we brought the pups along. Not all of the trails are dog friendly, so we unfortunately weren’t able to go to the redwood grove, but we were able to take them on the Pipeline Road Trail, which led us to these views:

After our hike, we went to Beer Thirty in nearby Soquel. Beer Thirty is a local brewery that is not only dog friendly, but has an off-leash dog area in the back. Their beers were delicious, and on top of the dog area they had a large patio with lawn games and picnic tables. The dogs were thrilled, and this dog mom was just as thrilled.

A few weeks later, we headed back up to Santa Cruz to explore more of the beer scene. Many of the breweries in the area are dog friendly, so once again we brought along the pups (and the humans that belong to them!). We started the day at Humble Sea Brewing Co., continued on to Santa Cruz Mountain Brewery, then left the boys with the dogs and the girls went across the walkway to Equinox Sparkling Wine (because I am a sucker for bubbles!). We stopped at El Salchichero to pick up some snacks – blood sausage and proscuitto for us – and then got food at Taqueria Los Pericos on the way out of town which had incredible burritos. 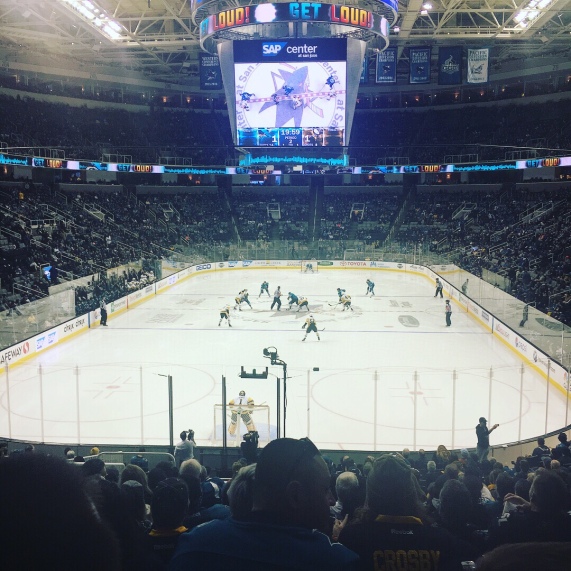 I am a huge Pittsburgh Penguins fan, and when you’re a fan of an east coast team living on the west coast, you only get one opportunity a year to see them locally. The Pens played in San Jose on January 20th, so we obviously had to go up for the game. A few friends were also going to the game, so we met up at Hapa’s Brewing Company for some pre-game drinks. I absolutely loved their beers, and they were also dog friendly although we didn’t bring the dog this time since we were headed to the hockey game afterwards. They have different food trucks, so we were able to get some pizza which was really, really good. The Penguins, unfortunately, lost; but I was able to enjoy plenty of beers and we had a blast at the game regardless. After the game, we headed to Kumako Ramen for more food – it was small, but absolutely delicious. I had a duck ramen which was the perfect way to prevent any ill effects from all the beer that was consumed. The bowls were huge, so come with an appetite and/or be ready to bring your leftovers home!

Another trip up to the San Jose area involved some plan changes when we were almost there, so thanks to Yelp, we found Loma Brewing Company in Los Gatos (about a 20 minute drive from San Jose). I didn’t know it at the time, but Loma is a joint venture between former Boston Red Sox player Kevin Youkilis and his brother Scott, so that was pretty cool to find out. They had some really delicious beers and some quite good chicken wing. We are hoping to go back in the spring once they have their Maibock – one of Max’s favorite kinds of beer. Yet another trip to San Jose – well, the airport 🙂 – took us to Lazy Dog Restaurant & Bar in Cupertino, a brewpub that has a dog friendly patio and some really delicious beers.

We went up to Oakland in early February to see Walk the Moon at the Fox Theater. As you probably know from my post about the Not So Silent Night concert, Walk the Moon is one of my favorite bands, and the Fox Theater is always on those lists of “iconic concert venues.” I’ve checked a few of those off – 9:30 Club in DC, Webster Hall in New York, Paradise Rock Club in Boston, etc. – so it was pretty cool to get to start checking off the West Coast venues. Perhaps the best part of the entire evening was that the Fox Theater has a bar you can get into before doors open. Not only did we not have to wait in line, but we got to get some drinks and snacks and get into the venue itself faster than we would have if we had been in line. Walk the Moon was incredible, as always, and we had an absolute blast dancing our faces off. We followed up the show with some dinner across the street at Itani Ramen, because we love ramen and it was close by. Oakland is maybe just a little too far to drive up and back in one night – we didn’t get home until close to 2 am – but it was absolutely worth it. We haven’t done too much exploring in the Oakland area, since we’ve only been there for specific events, but we passed quite a few cool looking bars and restaurants.

Phew! So as you can see, we’ve been busy for the last few months with no sign of slowing down. My adventures in Las Vegas and our short but sweet trip to St. Louis will be coming up soon, but until then, let me know: what are your favorite places in the Bay Area/Central Coast? I can always use more food! 😉