It took us 2000+ miles, but this East Coast girl who has managed to feel right at home in all the cities we’ve visited so far finally found one that took her out of her element. Cheyenne makes Mystic look like a bustling metropolis…which was incredibly weird for me. I am a small-city-or-at-least-populous-suburbs type of person. Towns with less than three stoplights are almost unnerving to me. But Cheyenne turned out to be quite fun, despite my initial discomfort.

The drive from Lincoln to Cheyenne was beautiful. I’ll let these photos speak for themselves: 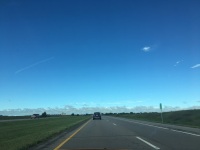 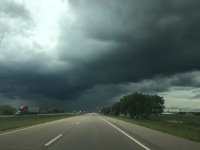 And then we arrived in Cheyenne. I was – as previously mentioned – incredibly out of my element. There were a handful of hotels, a downtown area, assorted restaurants and a train track. We arrived while a large train was rolling through, just yards from our hotel’s front door. My hometown has a train track running through it – in fact, the ice cream shop I worked at during summers in college was feet away from the trains and the whole building used to shake when a train would go by – so I am used to trains, but I was still not expecting one to be THIS CLOSE to where we were staying.

Again, thanks to Yelp, we managed to find a brewery (turns out Cheyenne has a handful of them) so we headed over to Danielsmark Brewing Company and had a couple of delicious beers. We asked the bartender where else to check out in Cheyenne since we were sore-thumb-obviously-not-from-here and she said “well…I’m from Fort Collins, so I’m not the best person to ask” and gave us assorted recommendations for dinner and drinks.

“Wait,” I said as we were leaving the bar, “isn’t Fort Collins where New Belgium [Brewery] is?” And thus the plans were laid to go to yet another brewery on this trip that has accidentally become the Brewery Tour of the United States.

That said, we went to Bella Fuoco wood-fired pizza, because I am a sucker for anything labeled “pizza” and got ourselves a jalapeno popper pizza with jalapenos, cream cheese, and sweet chili sauce. OMG. It was SO GOOD. It made me feel so much more at home to have some delicious pizza even though I was 110% out of my element (but pizza makes everything better, right!?) 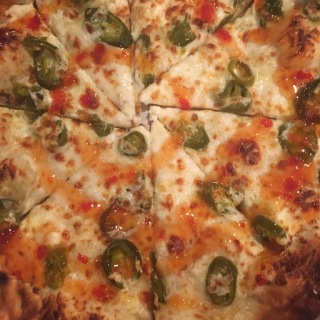 After dinner, we walked around downtown Cheyenne in search of more drinks and stumbled upon the Paramount Ballroom. Guys – this place speaks to me on SO MANY levels. It is a former theater that has been revamped into a craft cocktail bar/cafe – and it is absolutely beautiful. 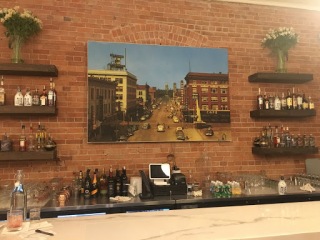 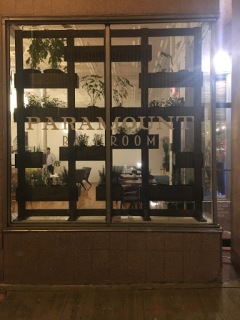 They had tons of local spirits and beers. My first cocktail was a Jameson (gotta honor my roots) drink with blackberries and lemon, followed up with a local gin, strawberry, and lemonade? maybe? I’ve already forgotten but it was DELICIOUS which is the point – drink as pictured with the cheese board. This cheeseboard was AMAZING, also – that one on the right was a chili-spiced goat cheese. The building was absolutely beautiful, right down to the restrooms which looked like they were very original to the building. I don’t know much about Wyoming or Cheyenne history, but this building seemed to be very historical. All of the cocktails were named after shows that once played in the Paramount Theatre, again piquing my former-musical-theatre-major interest; because who doesn’t love a cocktail named after an old play?

We ended the night with this – a main street of a western town, adorned with lights and no traffic. Everything just seemed a little bit simpler like this.